F/ Feet. Active on your feet.

I/ Ideas & issues that are important to you.

E/ Express yourself in a way that feels comfortable.

L/ Learn in a style that may be new and exciting.

D/ Do it for yourself and do it now.

UROCK are an innovative and experimental youth theatre company based in Peterborough UK, whose work is centred around creative practise in spaces of freedom. The dominant aspect of their style is their physicality and an improvised process that grounds them in exploring all avenues of the creative person.

This way of working is facilitated by professional theatre-makers with many years experience in performance and creative curriculum. It has resulted in a creative company ethos that encourages young people to explore their potential and make decisions about their material. Ownership of content is key to motivating learning.

UROCK continues to push its own boundaries, where its students are encouraged to take new approaches. The company has successfully sold out a week's performances at the Edinburgh Festival Fringe. The Company has continued its innovative approach by exploring site specific work at the East Midlands Regional Youth Theatre Festival, being partnered with the National Theatre Connections program, representing young people in the Royal Society of Arts initiative, Citizen Power, and spending time playing with new forms with members from primary age all the way up to adults, in the same sessions.

Students are encouraged as leaders and we are proud of the young people who have moved onto recognised national arts training centre. 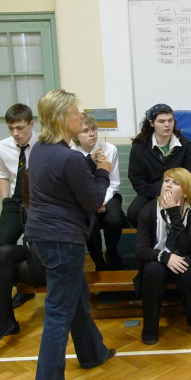 Di has worked in education as a teacher for 30+years. She gained Advanced teaching skills accreditation in the early phase of Estelle Morris's government initiative to drive up educational standards. She trained at Chelsea college of physical education and the Laban institute of contemporary dance. From the 1980's Di introduced national dance and theatre companies to Peterborough. These included: Mathew Bourne (Adventures in Motion pictures) Phoenix, Dundee rep, David Massingham,Jiving Lindy Hoppers, Frantic Assembly and Motionhouse. In securing brokerage of the arts sector Di was successful in bringing 2 major arts lottery investments for cultural learning with young and vulnerable people in the city.

In 2005 Di left teaching to work for Norfolk Creative Partnerships, leading the roll out to the Great Yarmouth cluster. Later taking on the role of acting director and steering the Norfolk CP team toward their present role with Norfolk and Norwich festival

Current freelance working roles include creative facilitator as an associate artist with Map consortium. This is a Royal Society of Arts programme involving senior leadership teams from public sector organisations in Peterborough, where Di has been leading a creative stewardship to maintain successful dialogue in action.
As founder of UROCK youth company she has achieved the reputation and ethos for original work and supporting the emergence of young artists. Now moving forwards as a social enterprise with Tom and Adam Fox as associate colleagues there is a real energy around building blocks for the future of UROCK. 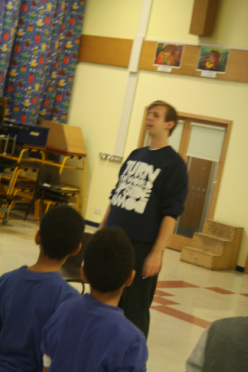 Adam is a freelance artist, specialising in dance and movement theatre, based in Peterborough UK. He trained at The Liverpool Institute for Performing Arts where he gained a BA (Hons) in Dance and Performing Arts. Adam's interests not only include performance and direction/choreography; but also creative education. As a visiting teacher, artist in residence and workshop leader he has worked for artistic and educational organisations such as Creative Partnerships, Youth Development Agencies, The Qualifications and Curriculum Authority and School Sports Partnerships; as well as in various schools around the country.

Adam's performance work includes musical theatre, commercial and contemporary dance styles, physical theatre, acting and improvisation. He is a founding member of YIC Theatre company, in which he has performed in Peterborough and London. He has also performed and choreographed at the Edinburgh Fringe Festival to sell out audiences with URock Musical Theatre Company. His directing and choreography work includes the Connections festival in assoiciation with The National Theatre, 'Mix Tape' dance platform in Liverpool, various student productions at LIPA, and many of URock's musical theatre, dance and physical theatre productions. He has also recently completed a full week's residency with Glasgow based disabled contemporary dance company 'Indepen-Dance', during which he choreographed pieces to be performed at The Merchant City Festival and for the Paralympic Torch Relay Scottish celebrations.

Adam's teaching work spans from leading workshops in theatre schools, churches and youth clubs; to facilitating and leading long term dance and education programmes in primary and secondary schools. He co-founded the male youth dance company 'URock Boys', as part of a progam in various schools in Peterborough, to engage and inspire boys with behavioural issues. The company later went on to include both primary and secondary aged students and sucessfully performed across the city at various platforms, events and a playground schools tour. Adam has also been a dance teacher and choreographer for Stage Coach and Doyl'y Arts theatre schools.

Adam is currently working with URock as a resident teacher/choreographer, for Lincolnshire South West School Sport Partnership as a dance specialist, and alongside Peterborough Learning Partnership on a new dance education program for local schools. 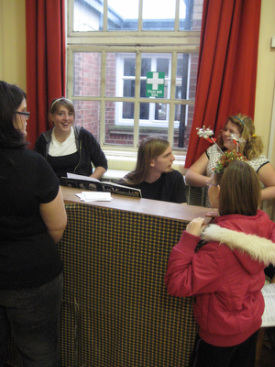 Tom has been creating theatre, music, films and goodwill in and from Peterborough for over 10 years. As a workshop practitioner he has gone on to work with many national creative organisations including Creative Partnerships, The Big Dance, The Royal Society of Arts and many schools in the East of England.

As one of the founders of the YIC Theatre Company (You're In Control) he has fronted projects that have strived to change, stretch or open the idea of theatre to their audiences. Explorations range from improvised musicals and soap-operas (This Is Peterborough), to plays in hallways (Expressive, Heartfelt and Somewhat Free) and walking performances (Walkabout).

He also works as an actor and improvisor performing in London with the Crunchy Frog Collective and The Sponteniety Shop, in Edinburgh with Pint of Poetry and in many classic productions.
His work with UROCK spans from performing (High School Musical - Edinburgh Fringe 2007), writing (Boy Band), collaborating (Missing and Black and White Notes) to his current position of a company facilitator and director of the Connections program.